Gloucester City Council wants to promote and celebrate a welcoming culture to people who make the city their home.

The city is currently rehoming families who recently fled Afghanistan after the Taliban regained control of the country in the summer.

And councillors say they recognise the contribution that people from diverse cultures and faiths make to the city and value the positive part they play.

They have agreed to develop a plan to work towards greater inclusion and equality for people seeking sanctuary.

They also want to create greater public awareness of the needs and issues faced by those seeking sanctuary across the whole city through a range of initiatives, projects and activities.

Councillor Terry Pullen (Lab, Moreland), who proposed the motion, said it was not just about the issues affecting those who recently fled from Afghanistan.

“We know that people from many nationalities, faiths and cultures have come to our city,” he said.

“We’ve been pleased to welcome them and we value and recognise the contribution they bring.

“Gloucester is continuing the tradition to welcome refugees and asylum seekers.”

He said he brought the motion forward because more needs to be done to raise awareness among the community and other organisations.

Cllr Pullen said the council should listen to people who have fled conflict and made Gloucester their home.

“We need to know what it has been like for them, whether they’ve been genuinely welcomed, what they’ve experienced, and how they have found coming to our city and what we can do to improve the situation.”

Councillor Justin Hudson (Con, Quedgeley Severn Vale), who put forward a successful amendment to the motion, said the city has welcomed around 140 people from Syria and Afghanistan.

“We have looked at the city of sanctuary network and support the principles and values found within its charter.

“In order to register as a local authority member there is some work, we need to do to develop the network of groups within the city.”

Cllr Andy Lewis (Con, Quedgeley Severn Vale) thanked the Labour group and said it was very needed and should be embedded in Gloucester’s culture.

“We speak a lot of languages in this city and on the whole, we are very welcoming.

“But there are some groups and the odd person who is not so welcoming but I think they need to be educated.”

“It’s particularly important that people who come from war zones get all the help they can get.

“The tone comes from the top and I’m pretty confident that Gloucester is a welcoming city.”

Councillors back calls to make Gloucester a city of sanctuary for refugees by | Gloucester News Centre - http://gloucesternewscentre.co.uk/ 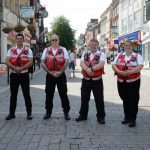 Burglar jailed after breaking into home of elderly victim

Man gets WW2 artillery shell stuck up his jacksie

Looking after the public sector in Gloucester areas for improvement