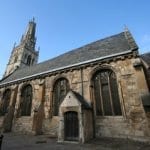 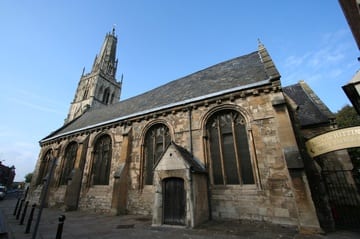 This Medieval church was built for Merchant Traders beside Gloucester’s (now vanished) West Gate. The church is a city landmark, known for its leaning, truncated white stone spire. Damage was caused to the spire by a direct hit by Royalist troops during the Siege of Gloucester in 1643 – and it is now topped with an attractive coronet.

The existing church dates back to the 12th century, though most of it was rebuilt in the 13th and larger windows were added later. Formerly one of Gloucester’s most prosperous Parish many of its wonderful monuments and memorial slabs commemorate significant citizens, some showing figures in historical Stuart costume. Most important is the Altar Tomb of Alderman John Wallton (died 1626) and his wife Alice. On either side of the Chancel is 16th-century Squints, giving the congregation a view of the sanctuary and there is an unusual Royal Arms above the south doorway that references not one but three monarchs – George I, George II and Charles II. How mysterious!, worth a visit by all budding historians and history seekers alike. Opening Hours 24th September -31st December.