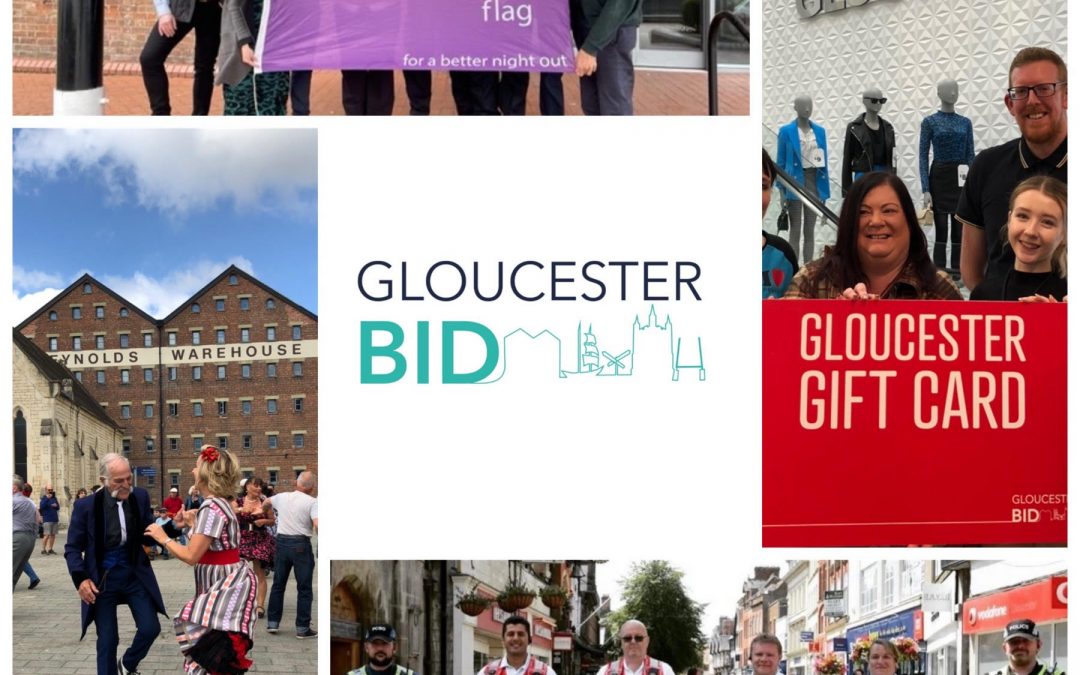 The BID, which stands for Business Improvement District, is an independent, business-led and funded body. Gloucester BID operates within Gloucester city centre and provides vital services for businesses such as the patrolling City Protection Officers and the Gloucester Gift Card scheme. It also provides the colourful summer planters and helps fund key footfall-driving events in the city including Tall Ships and Gloucester Goes Retro.

Gloucester BID aims to secure a majority yes vote for a second term ballot, to run to 2027.  Ballot papers are now being sent out to 543 member businesses in time for the official voting opening date of Thursday 2 June. Businesses will be able to vote on whether they want it to continue or not. Business owners have until Thursday 30 June to return their ballot paper.

BID Manager Emily Gibbon said: “Gloucester BID is incredibly proud of what it has achieved during its first term, much of which has been set against unprecedented challenges for traders thanks to lockdowns, restrictions and ensuing economic uncertainty.

“We are champions for Gloucester and, through schemes like the Gloucester Gift Card, introduced to dozens of local businesses through the BID, city shops, bars, cafes and more have been supported back to normality.

“Despite the ongoing cost of living crisis, where the price of just about everything is rising, the BID has been able to put together a second-term proposal that will actually see the levy our members’ pay drop, from 1.6% of their rateable value to just 1.5%. This is part of our total commitment to providing value for money and the best possible return on investment for businesses.”

Gloucester BID has set out to deliver on three key priority areas – safer city, attractive and vibrant city, and supported and promoted city – and it is these pillars around which the next five-year business plan is built.

Emily said: “Without Gloucester BID, the city will lose schemes including the City Protection Officers and Night Safe Officers, the summer planters bringing colour to the gate streets, the Gift Card, funding that ensures major events including Tall Ships, Gloucester Goes Retro and the Rhythm & Blues Festival go ahead, and an organisation that champions, advocates for, builds on and supports everything that makes Gloucester such a great place to live, work and do business.”

The first Gloucester BID ballot was in 2017 when business ratepayers voted to invest collectively in local improvements that are in addition to those delivered by Gloucester City Council. Gloucester BID collects an annual levy from more than members, each of whom pay an annual levy derived from 1.6% of the rateable value of their premises. Every five years, businesses vote to continue the BID for a subsequent term, based on a set of proposals.

A 2021 ‘health check’ of Gloucester BID praised its ‘exemplary’ business crime reduction partnership (BCRP) with the Gloucester City Protection Officers and Gloucester City Safe. The British BIDs Health Check report focused on all areas of the BID including: management and operations; financial matters; performance management and communications and reporting.

In particular, the report praised, ‘exemplary quantitative feedback from their crime reduction partnership.’ This recognised how Gloucester BID has worked towards a safer city for those who work, study, visit and shop in Gloucester. From 2017, the BID cooperated with Gloucester City Safe to introduce City Wardens and after universal approbation, it continues to provide funding to support highly visible City Protection officers who patrol the whole BID area.

Along with these positive findings, Gloucester BID has welcomed new members to the 10-strong BID board which is made up of a variety of business owners who make decisions on behalf of the levy payers in the Gloucester district.

Co-Vice Chair of Gloucester BID, Peter White said: “I’m very pleased with all we’ve achieved in Gloucester through a very difficult period, and we are now looking to steer Gloucester BID through the ballot campaign to achieve a Yes vote for a second term. We look forward to being part of key investments and exciting plans for the city.”