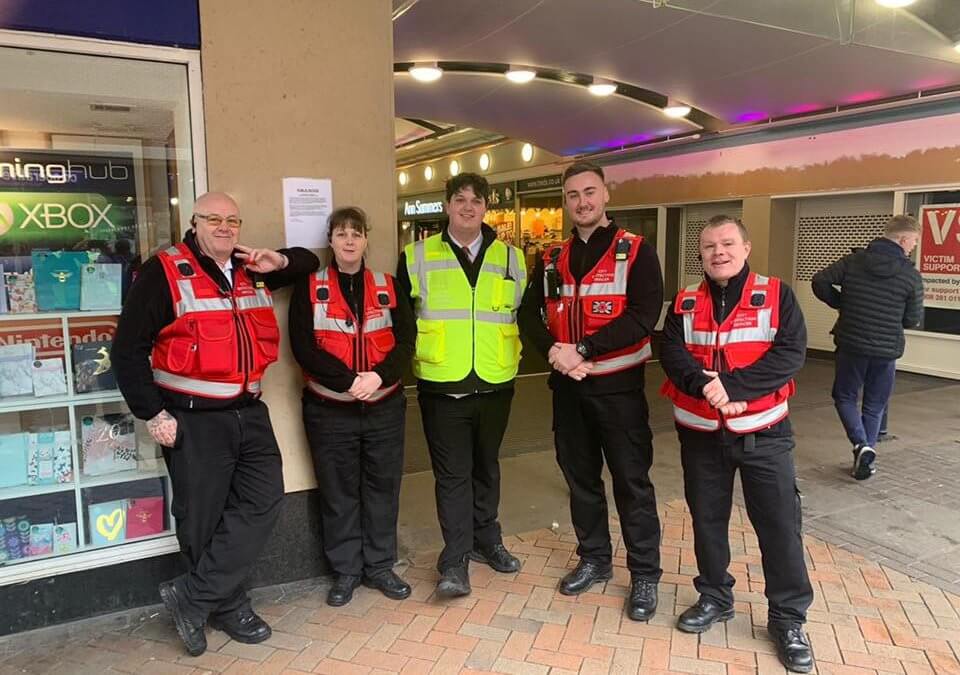 • 1st- Assisted in the collection of City Safe radios for servicing.
• Removed a group of females who refused to move away from the doorway to a shop after being asked to leave store by staff.
• Welfare check on an elderly female in the City following report from Public

• 2nd- Requested to remove a large group of street drinkers from the graveyard next to Café Rene, the group was dispersed and left the area.
• Intervened in an argument between two street drinkers who were causing distress and fear to the public around them. Separated, advice given and dispersed from the area.

• 3rd- Attended a meeting with the City Police sergeant at his request.
• Requested to assist with three female shoplifters, retrieved stolen items from different stores. All goods returned to stores. Police attended to arrest the females.
• Intervened in an argument between a large group of youths, two well-known individuals and a young female. Welfare concerns were raised over the young female and police were called who took over this incident from CPOs.

• 4th- Two major welfare incidents during the day, both concerning addicts requiring medical help which was arranged by the CPOs.
• Removal of a large crowd of street drinkers from the graveyard by Café Rene.
• Called to assist store with a prolific shoplifter – goods returned £157.87.
• Called to assist with an elderly gentleman who had forgotten where he lived, assisting in reuniting with family.

• 5th- A well-known individual who is banned from entering a City shopping centre was asked to leave and refused, CPOs then assisted and used reasonable force to move this person out of the centre.
• On request a large group of street drinkers were removed from the area of the graveyard next to Café Rene.
• Assisted the Police with cordoning off Long Smith car park due to an incident taking place.
• Two incidents of antisocial behaviour dealt with during the afternoon. All involving groups of youths.

• 6th- Assisted City shopping centre with finding a lost child.
• Assisted in the identification of a female in the company of a prolific shoplifter.
• Assisted with the identification of youths who had caused concerns in the Cathedral, this will be passed to PCSOs.
• Passed two major concerns for welfare of individuals to CCTV, continued to monitor throughout whilst in the area.
• Liaised with major venues, roof top and Café Rene events throughout the day.

• 7th- Called to assist with the identification of shoplifters to a new shop.
• Called to assist with two shoplifters, both have been issued yellow cards and entered onto the City Safe system.
• Requested by CCTV to attend Long Smiths car park, report of a large group of youths being a nuisance, they were removed from the car park and advice given.

• 8th- Returned all the stolen goods to the correct shops from the two shoplifters following an incident yesterday.
• Requested to attend the graveyard to remove a large group of street drinkers who were causing a lot of noise and ASB.
• Advised staff from a shop who had just taken counterfeit money on reporting this to the Police.

• 9th- Welfare checks made on all street drinkers and perceived homeless persons, first aid given to one of these persons, advice given to seek medical advice.
• Requested to identify a shoplifter, turned out that this person was also in breach of his Criminal Behaviour Order – This was all reported to the police.
• Requested to remove a large group of street drinkers from the Greyfriars church area.
• Attended a welfare situation, a young male had been beaten and verbally abused by his ex-girlfriend, advised and helped male to report to the Police.

• 10th- First aid given to older gentleman who had had a heart attack, ambulance called. CPOs carried out CPR until they arrived. Hospital follow up and stated male had survived.
• Requested to attend an events and council meeting at the Guildhall.
• Assisted a request to deal with a situation of threats and verbal abuse at store, the individual was removed from the area.
• Deterred a well-known prolific shoplifter from entering City Safe locations.

• 11th- Requested to remove a large group of street drinkers from St Mary Decrypt graveyard.
• Removed a knife left in an empty shop doorway, this was disposed of correctly.
• Checked out reports of a male next to a transit van with an Air Rifle in Kings Square area, on investigation this male could not be found.
• Removed a group of young people from the car park roof area as they were hanging over the wall and causing ASB.

• 12th- Attended by request to deal with a shoplifter, yellow card issued and added to city safe system.
• Deterred a well-known shoplifter from a major store and moved on, information passed to CCTV to warn all other city safe members.
• Assisted on request with the detention and arrest of a well- known shoplifter in a major store supporting single crewed police officer.
• Several welfare checks made by request, and removal of street drinkers from public sites around the city.
• 13th- Retrieved stolen stock and returned it to rightful owners.
• Assisted on request with a troublemaker in a café, this person was removed.
• Assisted with traffic and pedestrian control for the Gloucester Carnival.
• First aid given to a young female tourist who had twisted her ankle, also advised if swelling does not go down to visit A&E.
• Diffused a possible fight in the cathedral grounds, a large group of youths had an argument with an older couple, police called, but no resources.

• 14th- Assisted with a known shoplifter and goods retrieved and returned.
• Whilst carrying out welfare checks amongst the street people, one of the persons begging began an argument with the CPOs, this issue was finally sorted out and this person was moved on.

• 15th- Called to assist the security staff with speaking to two people camping out on private land, they were advised to clear up by the end of the day and move away from this area.
• Informed CCTV about somebody stripping copper tubing from an adjacent building.
• Welfare checks made at St Lucy’s Garden, stopped a major fight in this area, Police informed.
• Removed a drunk male causing problem in a charity shop.

• 16th-Recovered and returned stolen items.
• Assisted with three shoplifters and advised staff.
• Detained a known wanted person, awaiting collection by the Police.
• Assisted P3 Housing with a known street drinker who was causing a disturbance, Police arrived one was arrested.

• 17th Requested to attend at a large store to try to identify three males who had stolen over £1,272.00 worth of fragrance, no identification made but added to the City safe system.
• Attended an arranged meeting with the Council and staff from St Marys De Crypt church, along with Café Rene staff with reference to clearing the Graveyard area to keep out the street drinkers but allow the public to enjoy the area.
• Carried out two welfare checks at the request of CCTV, both cases were deemed safe.

• 18th- CPO reported a known troublemaker to CCTV for monitoring.
• Attended to a welfare call from a shopping centre to check on a lady looking distressed, Police already in attendance.
• Collected and took a pair of bolt cutters used in the proceeds of crime to the police station for disposal.
• Goods from shoplifting retrieved and returned to owners. Entry made onto the City Safe system.

• 19th-Two cases of stolen goods retrieved and returned to owners, entries made to city safe system, and one yellow card issued.

• 20th- Welfare checks done which included some basic first aid.
• Called to look at and repair a city safe radio, whilst there deterred shoplifter in large store and gave suitable advice to shoplifter.
• Broke up an argument between two street drinkers, they were separated and went on their way.

• 21st- Welfare checks made, and street beggars moved on.
• Investigation carried out on a stolen bike reported to PCSO.
• Requested to identify a shoplifter from CCTV for large shop.

• 22ND Sorted out radio problems for one city safe member.
• Assisted and advised a lady who had lost her handbag and personnel items, this was found soon after.
• Assisted with identification of a shoplifter.

• 23rd Welfare checks carried out to all rough sleepers.
• Assisted with a group of youths causing trouble in Cinema.

• 24th Initiated a missing persons search, escalated to a Police matter after the missing person not found.
• Assisted throughout the day with groups of teenagers in large groups and on bicycles causing disruption and minor ASB in City.

• 25th Assisted with the Police with youths attempting to steal a bicycle.
• Assisted the Police with a distressed female in a public house, had to administer basic first aid to cuts on the arm.
• Intervened in a dispute on The Cross, separated the people arguing they then went on their way.
• Assisted a store with a suspect package on site, called Police and cordoned the area until the Police arrived.

• 26th Assisted the police in two arrests of wanted males.
• Requested to remove a youth causing trouble who is already banned.
• Engaged with groups of youths riding through the city centre on bicycles.

• 28th Welfare checks to all rough sleepers and street people made.
• Assisted with two incidents of shoplifting, advice, reports made and updated onto the City Safe system.

• 29th Welfare checks made on all street people; first aid given to one.
• Assisted and help to deter a shoplifter.
• Advised and helped shop assistant with information following an incident in store.

• 30th Spotted and detained a wanted female who was then arrested by the Police.
• Monitored an individual of interest throughout the day and reported sightings to CCTV.

• 31st Called to an aggressive male, managed to calm him down and gave assistance with his damaged bike.
• Called to a store following a child who had lost his parents, made checks and informed CCTV, parents returned later.
• Attended to speak with a City Safe Manager and a group from Young Gloucester who were on an NCS course. Praised the work and drummed up some local businesses to support in rewarding this group.