CPOs at work in Gloucester 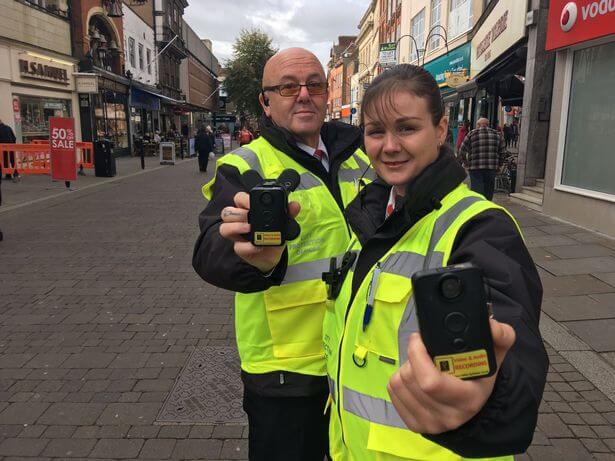 On a daily basis the CPOs are dealing with a wide range of issues from lost children to fly-tipping and shoplifters to street drinkers. We are getting feedback from shops to say their stock loss has reduced and the prolific shoplifters are very frustrated at being constantly monitored, deterred and when they do offend, detained.

Examples of recent work:
During the day yesterday, the CPOs spotted a young female busking in the City Centre – they had not seen her before and noticed she was carrying a bag with clothes and what appeared to be a sleeping bag. Throughout the day she was being ‘befriended’ by some of our well-known drug users and rough sleepers. The CPOs kept an eye on her through the day and just before they were about to conclude duty at 6pm noticed she was still sat outside the old BHS and was with a prolific shoplifter and drug user. The CPOs approached her and started a conversation. She stated she was 17 years of age and had arrived that day from the London area. She had nowhere to sleep, had suicidal thoughts and did not know anyone in Gloucester. The CPOs contacted Police CCTV and established there were no reports of her missing and so they phoned their contact at P3 who arranged for the crisis team to go out to see her. In the meantime, whilst waiting for the Crisis Team, the CPOs took her to the Cavern Club where she was safe and could have a drink and a warm. They waited with her and when the Crisis Team arrived they were able to assist and get her accommodation.

Horrible to think what could have happened to this vulnerable female had the BID sponsored CPOs not observed her, realised she was a new face and intervened to assist her.

Yesterday afternoon the CPOs were called to assist H&M who had caught 2 females in school uniform stealing. When detained they were found to have property from other stores with a value exceeding £140 which they had stolen. Unfortunately, some of the property had been damaged when they tried to remove the tags. The CPOs contacted the police and established officers were unavailable to attend. They then contacted the parents of the girls who attended, and arrangements have been made for them to return this evening after school to pay for the damaged goods. If not paid it will be pursued with the police.

Last week the CPOs detained a female for shoplifting. She was known to them and she had previously received a yellow card warning. Whilst talking to her, she told them about her heroin addiction and how she wanted to stop taking drugs. The CPOs said they had contacts and knew where she could get help. They arranged to meet her the following day to take her to CGL (Change Grow Live). Although sceptical that she would turn up – she met them at the arranged time and location and the CPOs escorted her to the CGL building in Longsmith Street where she was able to speak to a drugs counsellor and make an appointment to get further help. We don’t know the outcome, but she has not been caught offending since and fingers crossed that will continue.

These examples are just the tip of the iceberg to demonstrate the work the CPOs do daily. They, and everyone involved should be extremely proud of the work they are doing and impact they have had on the Gloucester BID area since their launch.