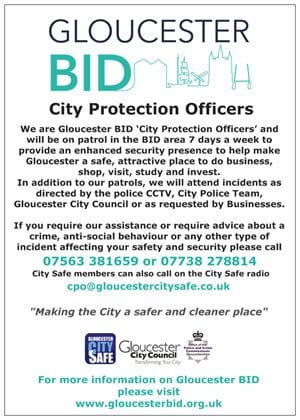 Gloucester’s new City Protection Officer (CPOs) are becoming a recognisable sight in Gloucester city centre, and have hit the ground running in a trial organised and funded by the Gloucester Business Improvement District (BID) with the support from the Police and Crime Commissioner’s Office and Gloucester City Council.  The first few weeks of the trial have seen many businesses and members of the public reassured by their mere presence.

One month into the trial, CPOs have assisted in all manner of cases from dealing with low level crime such as shoplifting and antisocial behaviour to requests for rubbish collections and even finding lost children.

The CPOs have also been working in conjunction with Gloucester City Safe to ensure that businesses are protected by the scheme, whether it is issuing yellow cards or dealing with exclusions and Criminal Behaviour Orders for persistent offenders.

“The City Protection Officers have completed four weeks of patrols in the City and I am delighted with the impact they have had in such a short space of time. They are now being recognised by businesses and the public and we are receiving lots of positive feedback about their presence and activities.

There is no doubt everyone feels safer having that uniform presence out and about. In addition to their patrols, the CPOs have visited over 220 Businesses to explain their role and to deliver their business cards with contact details, responded to 91 requests for assistance and issued 14 City Safe yellow card warnings. They have also dealt with shoplifters and helped recover more than £1000 worth of stolen goods. They are the eyes and ears of the council and are working with contractors to ensure the streets are kept clean, tidy and rubbish free.

I have certainly noticed a big difference since they started their patrols. The CPOs have also been engaging with charity collectors, street traders and buskers to ensure they are complying with the law and the Council’s policies and their presence and activities are not detrimental to the City and all those using it. Finally they are ambassadors for the City and are there to help.”

Kieron Bates, a member of the Gloucester BID Board, said:

“It has been brilliant to see the Gloucester BID City Protection Officers (CPO’s) moving around the city showing a welcoming presence and helping out anyone in distress as well as reporting anti-social behaviour and unnecessary litter in the city.”

“The very presence of the CPOs is helping make great strides towards Council’s promise to provide a safer and cleaner city. Initial indications show that the amount of litter has fallen by up to two thirds, the incidence of shoplifting has been dramatically reduced, and many other incidents are dealt with daily by this excellent team.”

Whilst the CPOs do not have the power of arrest, they do possess powers of a security guard and can, if needs be, detain someone until police arrive. The CPOs are Security Industry Authority approved, first aid trained and have experience of security work in the city.

Gloucester’s City Protection Officers are organised and funded by the Gloucester Business Improvement District (which is made up of early 600 businesses in the city centre and the Docks), and is supported with additional funding from Gloucestershire Police and Crime Commissioner

CPOs in Numbers (in first 4 Weeks of the Trial)