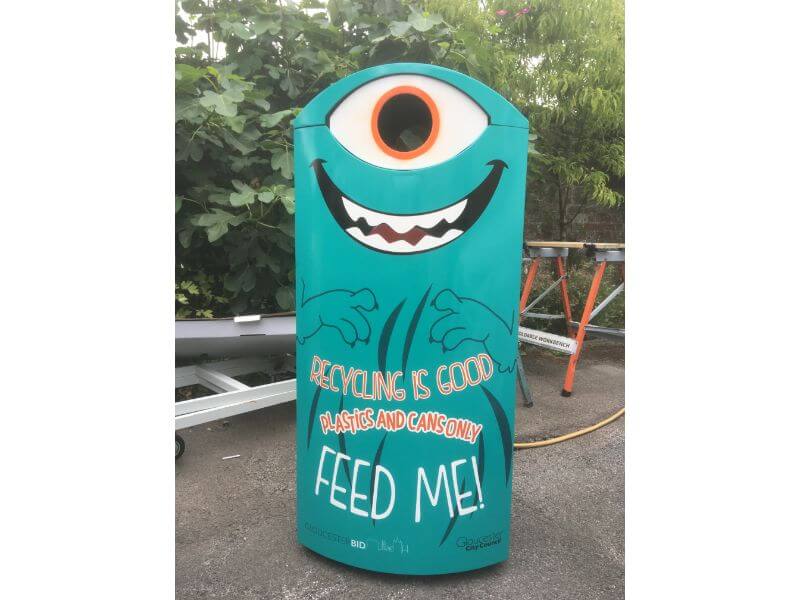 As the summer sunshine blazed across Southgate Street, a new recycling bin was unveiled on July 17.

As a part of a hip new pilot scheme to get folks excited about recycling, the bin has been made to look like a friendly monster and will be used for cans and plastic in one of the city’s busiest streets.

The grand unveiling took place at this afternoon, drawing the likes of Councillor Richard Cook, Gloucester City Council’s cabinet member for the environment, to kick off proceedings.

Mr Cook did the honours with the bin’s grand unveiling at 2pm prompt and said: “It’s a great idea, obviously.

“We’ll see whether or not people do engage by recycling into these bins – we have tried these before and people have just dumped rubbish in them and it just becomes unrecyclable.

“But people are really engaging with the concept of recycling nowadays and I think it’s something that we should try it again and see whether it’s a success.”

The bin will be overseen by contractors Amey, who oversee waste and recycling collection in Gloucester, to keep an eye on its progress and ensure it is being used properly.

It will be one of 53 public bins in Gloucester and will aim to reduce the amount of waste and litter within the city centre, particularly on the busy Southgate Street.

The bin has been a collaborative effort between Caelo Designs, Gloucester City Council, Gloucester Business Improvement District and Marketing Gloucester, who have all been involved in the creation and promotion of the new waste receptacle.

Mr Cook continued: “It’s great that it is nearby a general waste bin so that people won’t have to go far if their waste is not recyclable and will help ensure it is used correctly.”

Jason Smith, chief executive at Marketing Gloucester and part of the team behind promoting the new bin, agreed that the bin was a boost to Gloucester’s city centre.
He said: “I think it’s very nice that there’s a bit of innovation going on in Gloucester and it’s about not being afraid to try something.”

The bright shade of turquoise and cartoonish exterior of the bin was no coincidence, as it was part of a design by a member of Caelo Designs to attract more young people to recycling.

Mr Smith agreed, saying that: “It’s a way for young people to get interested in recycling and also for them to teach their parents about it.”

This was proved as the first plastic bottle was deposited by 16-year-old Jade Overthrow, who said of the bin: “It’s great, it’s obviously trying to get young people involved, which is great.”

Older citizens of Gloucester welcomed the innovation as well.

Citizen Andy Long said: “It’s a nice bright colour so people will see it from all around, it’s a bit of a fun design for kids – very positive!”

Only time will tell whether the new bin will live up to the high hopes and expectations.

Nurses speak out about work pressures at Gloucestershire Royal Hospital

People at risk of parking charges in Gloucester Docks

Constant roadworks make residents feel ‘trapped in their own village’