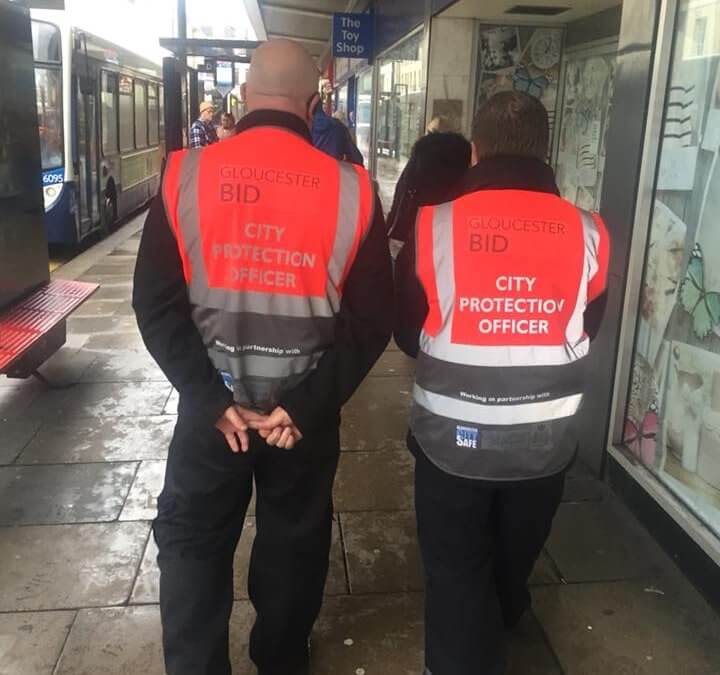 CPOs have retrieved almost £4000.00 worth of stolen goods back to the correct store within the month of December 2018.

• 1st – Event on Kings Square- staff unable to contact relevant person to empty overflowing bins. CPOs contacted council staff and bins were emptied. No further issues.
• 1st – Night Time Economy – CPOs dealt with a vulnerable female in Debenhams doorway who had possibly had her drink spiked. CPOs informed Police CCTV and contacted a relative, then stayed with female.
• 2nd – CPOs dealt with a group of youths causing ASB in McDonald’s and TKMaxx- group were monitored by CCTV, who then left the city.
• 4th – CPOs attended street aware meeting with council and other partner agencies.
• 4th – CPOs dealt with an altercation on King’s Square- fight broke out- CPOs intervened and stopped the fight. Police attended.
• 5th – CPOs were called by CCTV to attend a vulnerable female who had put a piece of material around her neck to self-harm – CPOs met up with female and removed the material and provided safeguarding advice. Monitored by CCTV
• 6th – CPOs helped the cathedral staff move the nativity set up whilst on patrol of the area.
• 6th – Two known males stealing bikes- CPOs detained one male who became aggressive and reasonable force was used. Police arrested the male.
• 6th – Fight outside Chambers Public House – CPOs responded and broke up the fight. One male smashed a window in the Regal Pub, who was arrested by the police.
• 7th – Incident in McDonalds where a male was arrested by the police, CPOs supported Officer.
• 8th – Well known beggar located in City centre by CPOs. CPOs approached the male who was begging. The male became verbally abusive when offered advice and support, male was asked to stop by CPOs. CCTV monitored the male who shortly left the City as it became clear he did not want any support referral from partner agencies.
• 9th – CPO’s called to assist with a shoplifter. Male was being aggressive when stopped by a store security officer. CPOs detained male and police were called- arrived and arrested.
• 10th – CPOs identified three shoplifters from three different stores whilst reviewing CCTV.
• 10th – CPOs called to a fight on Southgate Street. Owner of a restaurant and 4 young males were having a heated discussion on Long smith St. CPOs intervened and asked the owner of restaurant to return to his store. CPOs informed the males that CCTV were watching and to leave the area. The males left the area in a car. Information passed onto the Police CCTV.
• 11th – Entertainer called CPOs reference a theft that had occurred. CPOs asked for a description. CPOs located the shoplifters in Eastgate street. The shoplifters dumped the stock in another store- CPOs retrieved goods of £83.00 and returned to store. The shoplifters were then followed out of the city by CPOs and CCTV.
• 11th – CPOs were asked by Police CCTV to look out for a male who had jumped into the docks, was last seen on Southgate Street. CPOs spotted wet footprints in Southgate street and was asked by CCTV to follow them. CPOs followed footprints to the top of Eastgate street by GL1. CCTV informed no one was found.
• 13th – Youths on bikes causing issues in Kings walk. CPOs spoke to group who left the area.
• 16th – Two males acting suspicious by NatWest cashpoint- Police CCTV informed and monitored.
• 17th – CPOs detained a male that police CCTV located for stealing a bike. CPOs spotted a nearby police car and handed him over to the officer.
• 18th – Male being aggressive to staff in City Shop. CPOs were called to the location. Male was known to the staff working in store. Male assaulted CPOs and left the area. Police CCTV informed and Officers attended as this was domestic violence related.
• 19th- CPOs called to remove a drunken male from a coffee shop.
• 19th – CPOs located a missing person and reunited her with her family.
• 20th – Store asked CPOs to remove a male who had gained access to the store during the night and fell asleep.
• 20th – Well known aggressive beggar located in the city. As CPOs approached the male, he got up and was then seen leaving the city.
• 21st – Meeting with the local neighbourhood policing team (Bearlands).
• 21st – CPOs attended a pub where a male requested first aid. This was provided by CPOs, no paramedics required.
• 22nd – CPOs found a wallet whilst on patrol. CPOs informed the owner who came and collected the wallet the same day. He was very grateful. He had lost his wallet during a night out in the City.
• 22nd – Four youths caught for shoplifting- parents were contacted and collected their children, City Safe educational carried out to deter from shoplifting.
• 22nd – City pub called for urgent assistance- CPOs separated a group of 8-10 people. Police attended, and 2 arrests made for assault.
• 23rd – CPOs assisted with carol service at the cathedral.
• 24th – CPOs retrieved £958.56 worth of stolen goods over the day.
• 25th – Merry Christmas – Staff not on duty.
• 26th – Boxing Day – Staff not on duty.
• 27th – CPOs assisted PSCO with a male drinking alcohol and sniffing Butane Gas. Male was issued a yellow card on CitySafe.
• 28th – CPOs monitored a male with a CBO in the city. CCTV was informed.
• 28th – CPOs were called to a fight outside the kebab shop on Eastgate street. CPOs broke up the fight. One male was detained for causing criminal damage on a vehicle he had kicked. Police arrived and arrested the male.
• 29th – CPOs were called to assist a female who had collapsed in Kings walk during late hours. The female was known to CPOs for the same incident. Paramedics arrived, and the female was taken to hospital.
• 30th – well known shoplifter detained for shoplifting. Police informed unable to attend
• 31st – CPOs helped identify two shoplifters who had stolen £500+ worth of stock in Hugo Boss, Gloucester Quays by reviewing CCTV.